Unlit - Behind the scenes with the Devil and the Succubus

An idea in the making for over 6 months, this is the most complex shoot I have undertaken till date. The concept came to my mind one morning out of nowhere. Basically, I wanted to depict evil playing mind games with itself and the Devil and the Succubus engaging in a game of chess seemed like the best way to go about it. I've always wanted to shoot images that looked like a painting with carefully crafted lighting, showing a moment frozen in time and this seemed to be the perfect opportunity for it.

The next few weeks were spent researching on the characters and basically, putting the scene together in my head. Once the basic idea was in place, I contacted an amazing Cosplayer named Kelton to work on the art direction. Kelton is quite accomplished when it comes to make up and props and I knew that he's more than capable of bringing my vision to reality. Next, we engaged an excellent MUA names Hana into the fold. Lastly, the super talented Khym joined the team to play the role of the Succubus.  Srikeerthi was the second photographer on location. Sylvia was in charge of lighting assistance and the behind the scenes shoot.

Once the team was finalized, we spent time shortlisting the props and other items we would need to complete the scene. The items were bought from the local stores or the internet. I also spent time shortlisting a location for the shoot. Based on the idea I had in my head, I wanted a location with a lot of warm tones in it (A "Cozy hell", if you will) as the Devil's lair. Fortunately, we managed to find a hotel room that fit the bill.

On the day of the shoot, we arrived around noon at the location. The artists and the MUA started working on the make up and wardrobe while me and the camera crew engaged in setting up the scene. The location immediately posed some challenges for us in terms of usable space. After some experimentation, we figured out an ideal placement for the 70mm deep octa. I decided to use a golden reflector inside to add some warmth to the light. I also used only the inner baffle in the octa to preserve some bite to the light.

After the first few test shots, it was clear that the basic lighting was OK, but there was a little something that was lacking. I've been looking at a lot of Joe McNally and Frank Doorhof images lately and I decided to have fun with something that they are fond of. Using color to add mood to the scene.

While the warm tones in the light, location and make up worked nicely with the Devil's theme, the Succubus is considered to be a cold and calculating creature. You can see this in her make up, wardrobe as well as the blue chess pieces she is playing with. Hence, I decided to add an SB 900 to the scene to throw some accent light on her. I put a green gel on this and turned the power down quite low to just add a hint of light to the scene without being too overwhelming. When I used a bare flash for this, there was too much spill into the background. Hence, I tamed with with a DIY snoot made of newspaper. 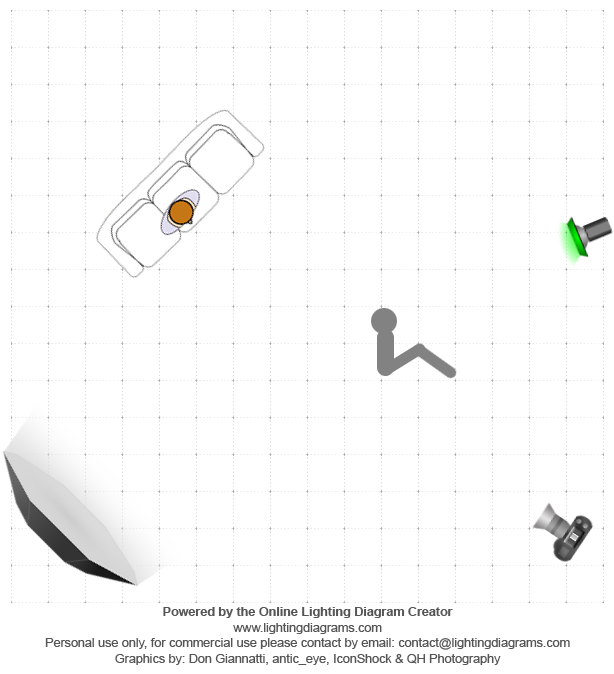 I shot the scene with my D800 and the 16-35 VR at the wide end (And still had my back against the wall). I dragged the shutter a bit to get the warm ambient light in the shot as well.

The shot was post processed quite extensively in Capture One Pro (With a few localized edits to accentuate specific areas) and finished in Photoshop CC.

Here is the final result:

The Devil and the Succubus...and so whispered the Succubus to the slithering snake,
If you want to play games with the Devil my friend, you best be a move or two ahead.

I hope you liked this image. If you have any comments or questions, do feel free to drop a comment.

No comments posted.
Loading...
Full disclosure:
This site is affiliated with Adorama Inc. However, I do not get any free equipment from them, nor am I required to get prior approvals from them for my posts. If you shop through the Adorama banners on this site, you will not pay anything more than you would otherwise, but I would be receiving a commission from them.